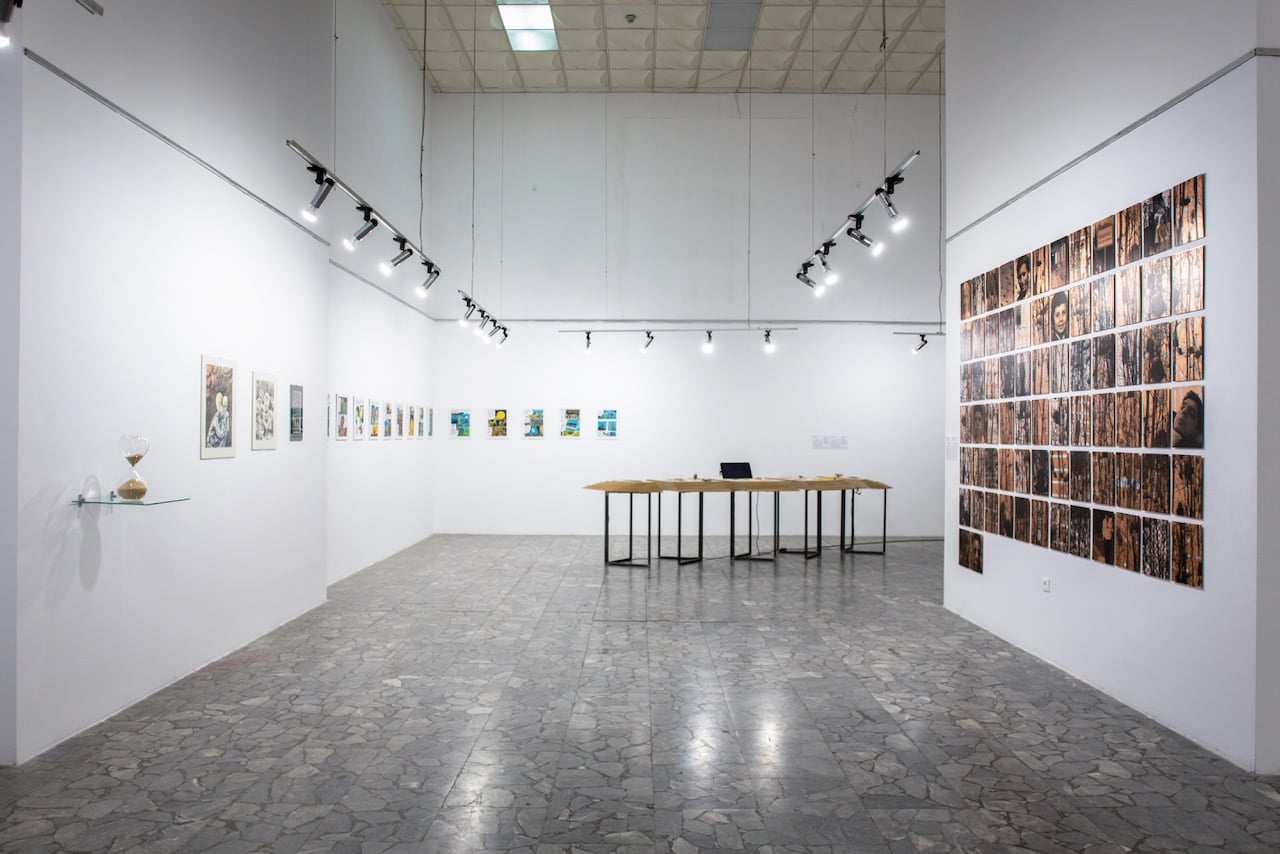 Missing stories: Forced labor under the Nazi regime. An artistic approach. ” was opened near the National Historical Museum on August 8 and will remain open to the public until August 20, 2021. Five curators have taken care of the selection of the participating works. They are: Adela Demetja (Tirana Art Lab), Natalija Vujosevic (Institute of Contemporary Art – Cetinje), Sanja Kojić Mladenov (Museum of Contemporary Art – Vojvodina), Thomas Elsen (Center for Contemporary Art – Augsburg) and Una Popoviç (Museum of Contemporary Art – Belgrade). The exhibition contains works that were created during 2019 by a group of artists from Albania, Serbia, Montenegro and Germany. The initiator of this project was the Goethe Institute in Serbia, supported by the EVZ Foundation (German promoter of human rights, in memory of the victims of socialist injustice). During his visit to Serbia, the director of the Goethe Institute, Frank Baumann, recalled the information void on this part of history and saw it necessary to expand the narrative on the World War II with the experiences of the Balkan people. After Tirana, the works will be exposed in Augsburg and Berlin.

The works belong to various mediums, starting from paintings to installations, videos and sculpture. Their role is informative and awareness-raising. They come as a result of a long research work by artists and curators who have exploited the archival assets of the respective states. Numerous materials that helped the realization of the project can be found on the website dedicated to it and in the catalog of the exhibition.

The exhibition is personal, it often transmits stories of family members of the artists and their experiences. The research of the artists is dedicated to the impact of World War II in Southeast Europe and forced labor in nazi camps around the Balkans.

“Postcards from Bor” (drawings) by Aleksandar Zograf (Serbia), is a series of 14 color drawings in the style of comic books, dedicated to the life and death of Jewish-Hungarian poet Miklós Radnóti. The poet was sentenced to forced labor in the Nazi camps in Bor (Eastern Serbia), where he died cruelly. After his death, his poetry notebook was found in the massive grave where he was buried.

Burkhard Schittny (Germany) dedicated his work “Dignity” (video installation and drawings) to the Jewish-Hungarian artist Agnes Lukacs. She was persecuted in a camp near Hamburg, but she survived and after the war she published a series of drawings of a group of women trying to escape the hostile environment   that surrounded them. The female solidarity and the reliance on each other is a repeated element in this series, which has deeply impressed Schittny, who turned Lucacs’ drawings into cool color movies, where the women move slowly and silently. With their shaved heads and dry appearance, the women seem like prisoners or people of the future at the same time. Next to the videos there’s the second work of the artist, an hourglass named “Hunger”.

“Selman’s dream” (installation) was created by Christian Hörl (Germany), based on the stories of Serbian artist Selman Trtovac on the Gestratz village, where Hitler’s authority and the related events were not questioned. The village bears no trace of nazism and the peace ruling the neighborhood relations was not compromised, at least superficially, thanks to the forgetfullness and collective disregard. The work consists of 74 photographs in copper plates representing the period of 1945 – 2019, one for each year, in remembrance of the Nazi atrocities.

diSTRUKTURA, the Serbian artistic duo has presented “Staying human” (video), which consists of various recordings that were filmed in the concentration camps of Mathausen, Mjdanpek and other ones along the Danube. “Staying human” is the inscription that accompanies a shaving brush on display at Mathausen, that belonged to the grandfather of Milan Bosnić, one of the members of diSTRUKTURA (the other member is Milica Milićević). Their second work“186 Breaths”(audio/ wall installation and drawings) consists of an audio file, where you could hear the sounds of the heavy breathing of the prisoners climbing the so-called “Stairs of Death” at the Mathausen camp. The work consists of 186 frottage drawings, placed on the wall in a way that they visually imitate the walking on the stairs.

Donika Çina (Albania) has brought her work “B Side” in “Missing Stories” (video and audio), an experimental documentation of family history, and a continuation of her work “Untitled (Family Tree). “B Side” includes a number of monitors connected to headphones, through which the visitors can hear the subjective opinion of the artist’s family members on the murder of her great-grandfather, Kosta Çina.

Dragan Vojvodić (Serbia) was inspired by historical events (the wars in Europe and Balkans), as well as family traumas in the creation of his work “History repeats itself” (installation). Identity and memory gaps in his family history lie in the foundation of the cold steel intallation, empty shelves illuminated by neon lights, suggesting only an absence of substance. The installation does not suggest at any point what it may be, but it allows the visitors to observe the open work of art (in the words of Umberto Eco) and to freely interpret its nature or role.

During a conversation that was considered taboo in the family until then, artist Ivan Salatić (Montenegro) was accidentally introduced to the fact that his grandfather  had been subjected to forced labor in Nazi Germany.  Some moments narrated by his grandmother and a few photos inspired the creation of “We wanted to forget” (audio video), the work he presents himself with in “Missing Stories”. With the information on this part of the family history, the artist took on the role of the corrector of what’s lost, reflecting the vulnerability of memories.

Lenka Đorojević (Montenegro) created “Exit” (audio visual installation) based on the memories and experience of Hasena Sulojdzic – Terzic during the imprisonment in the Ludwigsfelde camp, where she would work underground in an aircraft factory. The narrative and the objects of the work transmit the experience of the subject, but also the idea that vitality cannot be completely suppressed, something unbreakable remains beyond the control of even the strictest systems.

“I forbid your soldiers to enter my vineyard” (acrylic paintings) are two works by Milorad Mladenović (Serbia). The title phrase was allegedly said to a German officer by his grandmother, after a soldier picked her grapes without her permission. One of the paintings depicts precisely this moment from the vineyards of his grandmother Živana in Danube, while the other painting shows the image of his grandmother based on the photographs he found, with a baby in a cradle. The second work of Mladenović “The research” contains 12 photographs of several women’s portraits morphed through Photoshop, presenting the exploration of the character and identity of a German woman.

Remijon Pronja (Albania) presented “Wavelengths” (video installation), focusing on the social and political developments in Albania during the Nazi-fascist occupation. During this period, several concentration camps where built in different cities of Albania, where they would send the government opponents.  The same camps were later used for the purposes of the communist regime. Abedin Beqir Destani, an electrician from Albania, experienced persecution in an Austrian camp and after the end of the war, he was also persecuted by the communist regime as a war criminal, but in both cases his profession as an electrician saved him. The video installation features a neon light and a man trying to visually convert into waves of light the story of Destan, told by his son and grandson.